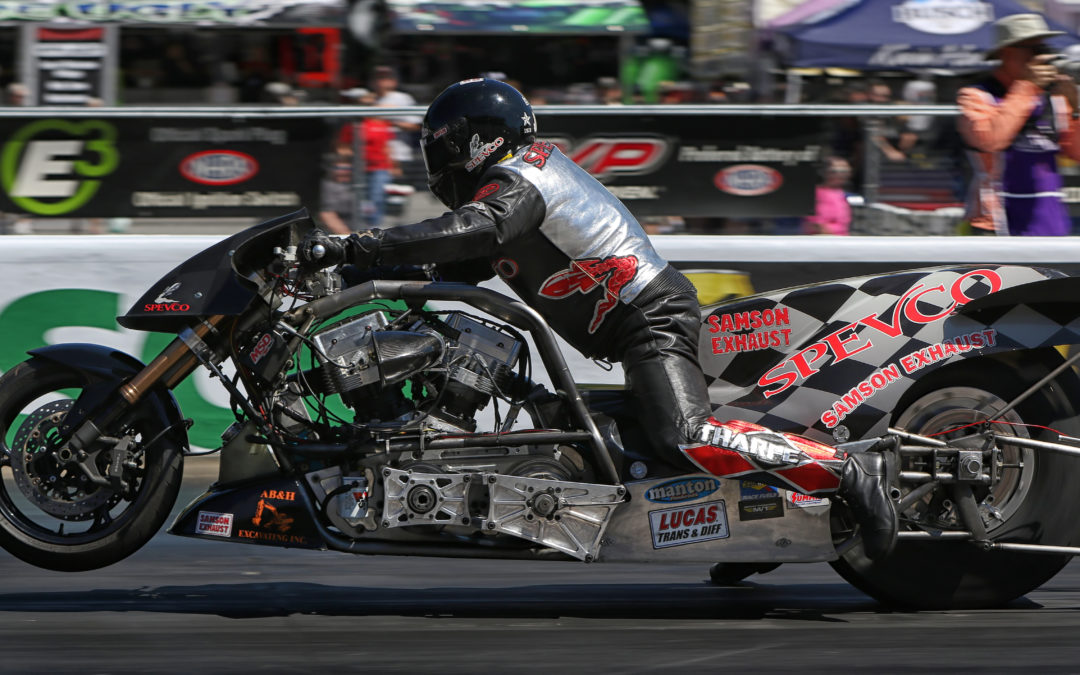 When two skilled American manufacturing companies join forces, success is likely to follow. And even better when one of those companies is run by the NHRA Top Fuel Harley champion. Tii Thape is making room on his Spevco-sponsored mount for Mike Baverstock’s Samson Exhaust to jump on board and make some “Loud Pipes Win Races” kind of noise in the Mickey Thompson Top Fuel Harley series.

Both companies are known for the quality of their workmanship—Spevco for large custom display, experience, and operations vehicles, while Samson designs and fabricates custom motorcycle exhausts and OEM vehicle tubing.

The partnership officially begins at the 50th annual Gatornationals and continues on to the Houston event in what is currently a two-race deal on Tharpe’s Jay Turner Racing bike.

“We here at Samson are excited to be partnering with Spevco on Tii’s bike,” said Baverstock. “Tii and Jay Turner Racing are proven winners in an exceptionally difficult class, and we are honored to be part of such a great race team.

“Since my business partner Rick Whipp and I purchased Samson in November of 2017, we have been dedicated to producing top quality aftermarket exhaust for Harleys and select Indian motorcycles at an affordable price. Rick and I have a combined 50-plus years in the exhaust industry, successfully serving both motorcycle and OEM vehicle tubing needs through both Samson Exhaust and Samson Tube Products.

“We feel our alignment with Spevco and their core way of doing business is a perfect fit for our company. We have an initial deal for these two races with potential to extend our partnership in the future.”

“Spevco and Samson are both American manufacturers doing their work in-house and with great pride,” said Tharpe. “I’ve always been a fan of Samson.  I worked at Crossroads Harley-Davidson and we sold a lot of them there. Our customers were always pleased with the looks, sound, and performance then, and their product line now is totally in sync with today’s culture, with the bikes we see on TV.

“Samson has always supported our sport and that says a lot about their passion for performance. I know Mike has been involved in drag racing for some time. He speaks with passion and enthusiasm about his company and the sport, and promoting his company with the sport. I like that.

“It’s gratifying to have a major manufacturer show interest in our program, and I truly hope we can generate a positive return on investment for Samson. And if we are successful, this might lead to other teams in the class generating sponsorship and value for their partners.

“These Gainesville and Houston races will be a learning experience for both parties.  If we do a good job and it is reciprocal, we should have a successful and lasting relationship.”

In addition to working with a new sponsor, champion Tharpe is also riding a different bike this year—the “Lagertha” mount that Turner rode last season. “We have a couple of new bikes in the works, however ‘Lagertha’ has been treating me very well (finishing runner-up in the Pomona 2019 opener), so why mess with success? I have gotten familiar with the new set-up and she runs very well, and as I get more consistent the tuning will follow.”

Since Tharpe and Turner didn’t even make it to Pomona last year, and although they always show up to win, Tii feels that making it to the final round there this year puts him and his team way ahead. “Come to the track with your best game and turn on winlights,” said Tharpe. “If you do that correctly, the rest will fall in place.”

Like gaining a new, important sponsor. “I think it’s a great thing and I’m really happy to be involved with Samson. I’ll see if I can get Jay to mount a pair of Cholos Fishtails on this bad boy for the Gators.”

ITEMS IN YOUR CART